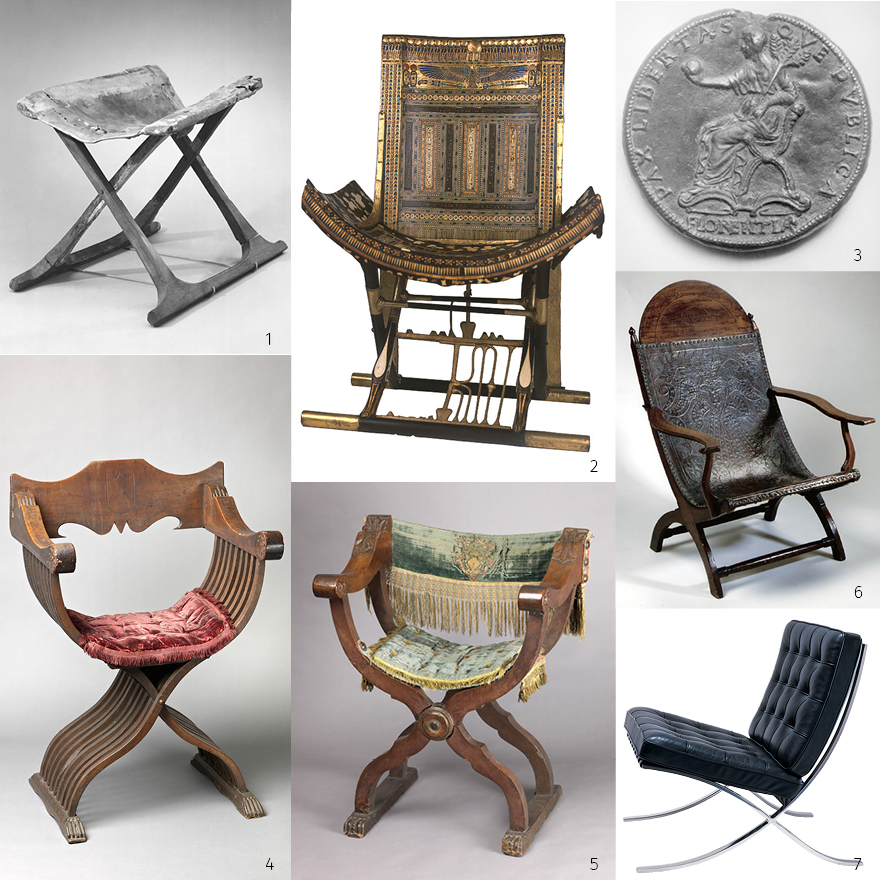 The curule-base chair descended from the Egyptian X-frame folding stool which had been adopted and refined by Egyptians based on earlier examples from the ancient Near East. Though the design lent itself to folding and portability, not all X-frames folded. Examples were well preserved in the dry climate of underground tombs in Egypt (1).

Egyptians used the humble X-frame seat in an official and ceremonial capacity. It was associated with persons of status – priests, scribes, and the architects who oversaw the building of pyramids and temples. Eventually the X-frame served as the stylistic foundation for the pharaoh’s throne (2).

The Greeks introduced the curve to the Egyptian X-frame. Though no stools survive, reliefs and vase paintings show elaborately carved, S-curved, and inverted lion’s legs. The curved base increased the X-frame’s weight-bearing capacity. Romans inherited the curule base from Etruscans and called it the sella curulis, or magistrate’s chair, carrying symbolism of rank and authority.

Sella curulis was adopted by the Byzantine culture where it continued to function as a sign of political influence. At this time it evolved into full chair format.

By the Renaissance, two curule-base chair types descending from the sella curulis existed in Europe. The first, a more archaic cross-constructed type with a laterally positioned curule-base was called the silla francesa, or “French seat” in Spanish (3). The second, called the sillón de cadera (hip-joint chair), had  a front-placed curule. The Savonarola and Dantesque are types of sillón de cadera (4 & 5). The radical move of the curule from the sides to the front of the seat was a medieval (Carolingian) development. These chairs were upholstered with patterned leather or fabrics such as velvet, and the frames often decorated with carving and inlay.

Both the silla francesca and the sillón de cadera were brought to the New World by the Spanish conquistadors, but the lighter and more comfortable French chair was preferred in New Spain. A hybrid chair type, the Campeche chair, developed in many places the Spanish colonized. The Campeche blended continental and indigenous styles with a curule base and an ergonomic sling seat. From Latin America the Campeche traveled north to the southern United States. There, it lost its association with rulers and political power, and was a comfortable porch seat for the bourgeois planter (6).

When Ludwig Mies van der Rohe designed the MR 90 Barcelona Chair for the German Pavilion at the 1929 Barcelona International Exhibition, he may have been inspired by the history of the X-frame form (7). He said: “I knew that King Alfonso XIII would be visiting the pavilion at the opening of the World Fair, so I designed the Barcelona chair for a king.”¹