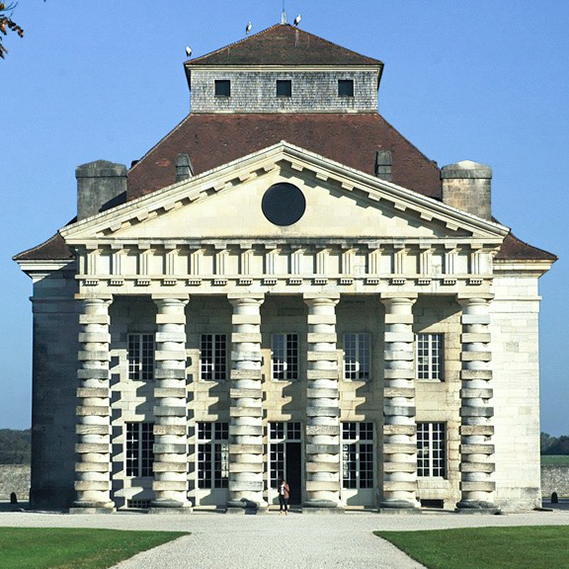 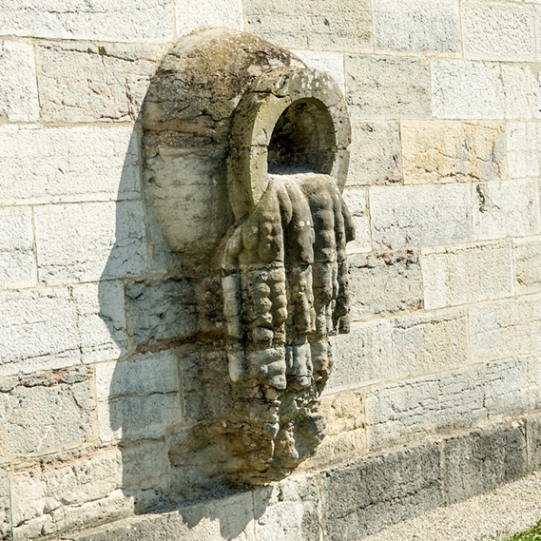 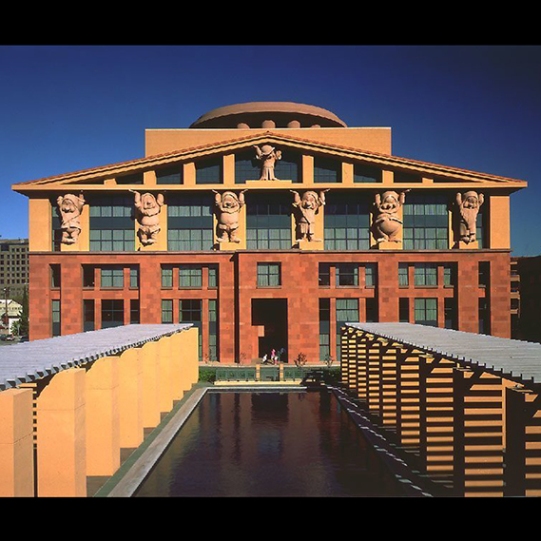 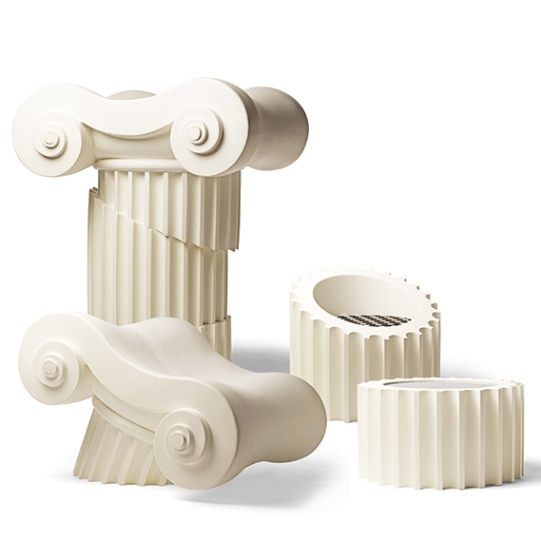 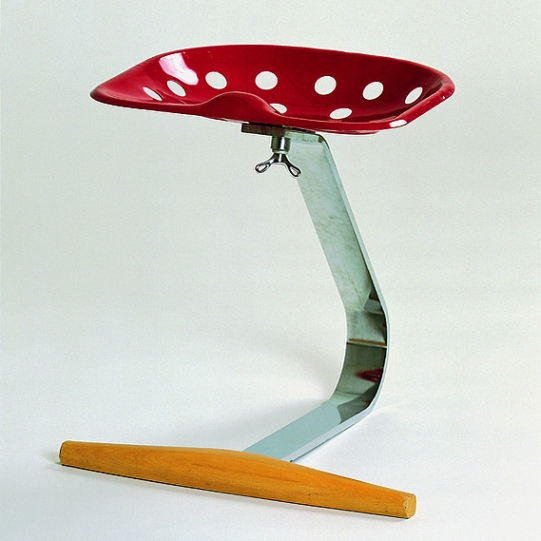 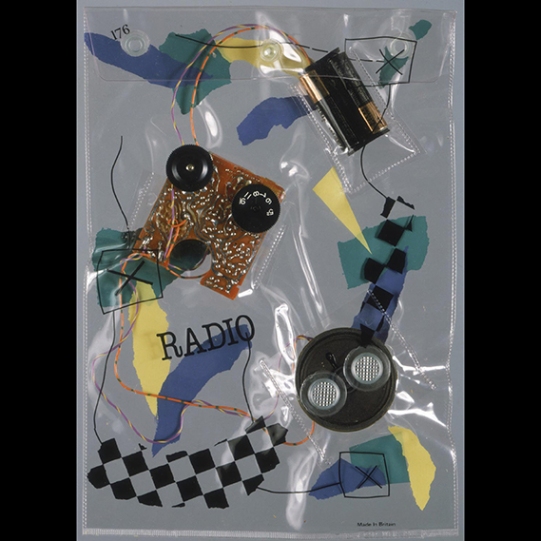 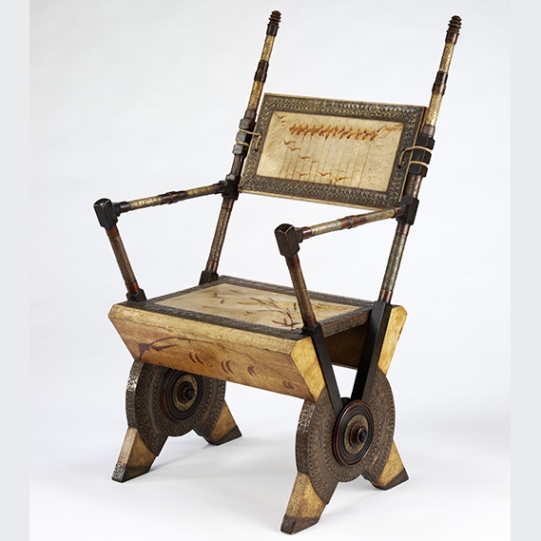 In design, postmodernists reject modernism and its prescriptive design solutions. Modernists believed in progress, truth, technology, functionalism, and universality. Its proponents attempted to produce the most appropriate, practical, and aesthetically pleasing designs to improve society. Beginning in the late 1960’s a cynical response to modernist utopian visions of the future gained momentum. Postmodernism is characterized by a loss of belief in absolute truths and the power of human consciousness. “Progress” had led to a hole in the ozone, Chernobyl, an energy crisis, and global recession. Disillusionment, self-interest, and a lack of communal spirit triggered an inward-looking response to the resulting built environment, where residential projects, shopping malls, and office buildings boomed and Modernism’s public spaces, parks, and transportation hubs collapsed.

The building and four pieces of furniture pictured here, each created before the 1960’s, have been juxtaposed with classics from the postmodern era. The older examples have style elements in common with postmodernism that help illustrate postmodern concepts.

The first two photos show an exterior shot and a detail of a drain at the Royal Saltworks of Arc-et-Senans designed by Claude-Nicolas Ledoux and completed in 1799. Radical and visionary for its time, the Saltworks reflect ideas of the Enlightenment—ideas that Modernism would inherit. It is the first workplace (a factory) designed and built to the same standards of scale and architectural quality previously applied only to palaces and religious buildings. Pictured next to Michael Graves’ Team Disney office building from 1990, the two buildings share a link to Classical antiquity with a humorous wink. During postmodernism architects reverted to the visual language of classicism following anti-historic modernism. The Seven Dwarves supporting the pediment are anti-intellectual, in the same vein as the crystallized salt rendered in stone “pouring” from the Saltworks’ drain. The Saltworks’ dominant columns anticipate Cubism by a century and look like machine cogs. Both buildings utilize humor and decoration to betray the “honesty” of modernism.

The next two photos draw inspiration from classical antiquity as well. A beechwood stool painted to imitate marble designed by C.H. Tatham ca. 1800, and a seating collection manufactured by Gufram from 1972. Painted wood and polyurethane ionic columns mock the idea of permanence associated with marble and the high ideals associated with classic architecture. Postmodern furniture designers were less concerned with function than with the communicative properties of furniture’s surface and frequently used inexpensive materials and garishly painted wood or decorated laminate to undermine symbols of quality and stability.

Appropriating from the past also demonstrated a loss of faith in the forward momentum of modernism. In the next pair of photos, on the right, sits a stylized Chippendale chair designed by Robert Venturi and Denise Scott Brown for Knoll in 1984. Venturi and Brown also designed chairs in Art Deco, Gothic Revival, Sheraton, and Queen Anne styles. Flat, minimal, and subtle, the laminated plywood chairs reduce the idea of a chair to back, seat, and legs similarly to the Josef Ulrich Danhauser’s armchair from 1825 pictured next to it.

The Mezzadro Stool designed by the Castiglioni Brothers in 1954 in the next pair of photographs incorporates the modernist aesthetic of removing superfluous elements to reduce an object to its essentials but the expression is humorous rather than formal. The tractor seat cantilevers over a wood base resembling a ladder rung by means of a steel bow attached with a bicycle wing nut. The stool brings to mind Marcel Duchamp’s readymades, and postmodernists would appreciate its pop aesthetic and lowbrow reference. Postmodern designers were inspired by Pop artists of the 1960’s for their use of color, pattern, anti-intellectual humor, and cartoon aesthetic. The Bag Radio designed by Daniel Weil in 1983 reveals the workings of a radio by encasing them in a plastic envelope. Like the Mezzadro stool, it humorously reduces the object to its essentials and breaks with the traditional form of the object. The added color, pattern and anthropomorphized look of the speakers and tuning knob contribute to its cartoon-like look.

In addition to sampling elements from different styles and eras, postmodern designers sampled from different cultures. In the last pair of photos, Carlo Bugatti’s armchair from 1902 and Elisabeth Garouste and Mattia Bonetti’s Barbare Chair from 1981 together borrow from Africa, Asia, and the Middle East. The ambiguous, hybrid, entirely fantastic references stand at odds with the pure forms modernism aspired to. Finally, their hand crafted appearance stifles modern notions of progress and a machine aesthetic.